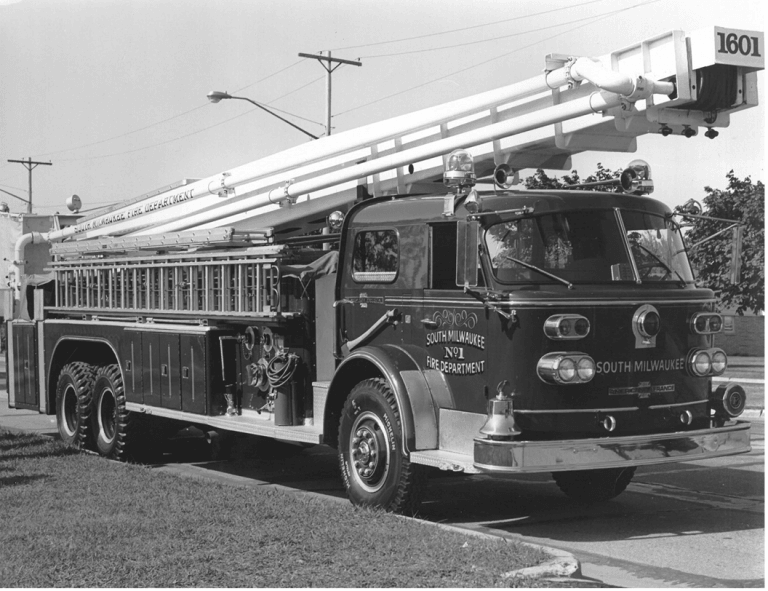 As Bucyrus moved to town, the then-Village of South Milwaukee was taking shape. The village established a waterworks system, and a 120-foot water tower was built of Cream City brick in 1893. The first water main terminated at 11th and Milwaukee Avenues. In 1894, the first village board meeting was held at the new village hall. In 1910, Mayor Dr. Sidney M. Smith built the first hospital in the city in 1904 at 1224 Milwaukee Ave., which has since been converted into an apartment building. (Trinity Hospital, on Lake Drive in Cudahy and now known as Aurora South Shore, began forming in 1953.)

Mayor Dr. Smith also promoted and built the first filter process water plant on the Great Lakes; it consisted of low- and high-service pumps, a mixing chamber, sedimentation basin, three rapid sand filters, a 200,000-gallon filtered water reservoir, and an 86,000-gallon elevated standpipe. Disinfecting with chlorine first commenced in 1915, and two additional filters were added in 1919, with continued upgrades. The first electric pump was installed in 1937. A 500,000 gallon elevated tank was built in 1950 next to the Cream City brick tower. A newer tank was constructed in 1997-98 for increased water pressure for domestic and fire needs to accommodate new construction on the north side of the city, including the South Towne apartments. The two old towers were dismantled.

One year after the Village of South Milwaukee was incorporated, Village President E. A. Bunn and village officials were working on a plan to collect stormwater and treat sewage. In the late 1800s, wooden box culverts and pipes were removed and replaced with brick sewer pipes and manholes. The city began a program of separating the sanitary sewage system from the stormwater collection in 1909, and had drying beds at the foot of Third and Marquette Avenues. A new primary treatment facility was constructed in 1936 at the present location at the mouth of Oak Creek. The City of South Milwaukee separated from Milwaukee Metropolitan Sewerage District.

After a fire on March 2, 1893, that destroyed the Lakeview Club Houses on Milwaukee Avenue the growing City of South Milwaukee called for action to provide fire protection for its residents. Additional horse-drawn engines were purchased, along with a horse-drawn hook and ladder unit. In 1921, the first piece of motorized apparatus was a truck the city purchased and was then outfitted to be used as an engine. The first fire station was a temporary location on 11th Avenue near Madison Avenue; in December of 1893, it was moved to the new city hall on 10th Avenue, north of Milwaukee Avenue. This building was used until 1929, when it was replaced by a new City Hall and Fire Station. This building was used until 1981, when a new fire station was built at 929 Marshall Court.

Upon incorporation as a city in 1897, the first common council agreed to hire part-time police officers, and they worked out of a garage near 12th and Milwaukee Avenues. Later, in 1929, a combined city hall, police and fire station was built at 2005 10th Avenue. The police department moved into its current location on 15th Avenue in 1982. After modest population growth from 1900 to 1950, a very large jump occurred from 1950 to 1960, and by the middle of the 20th century the South Milwaukee Police Department consisted of several dozen full-time officers.


A Push for Parks